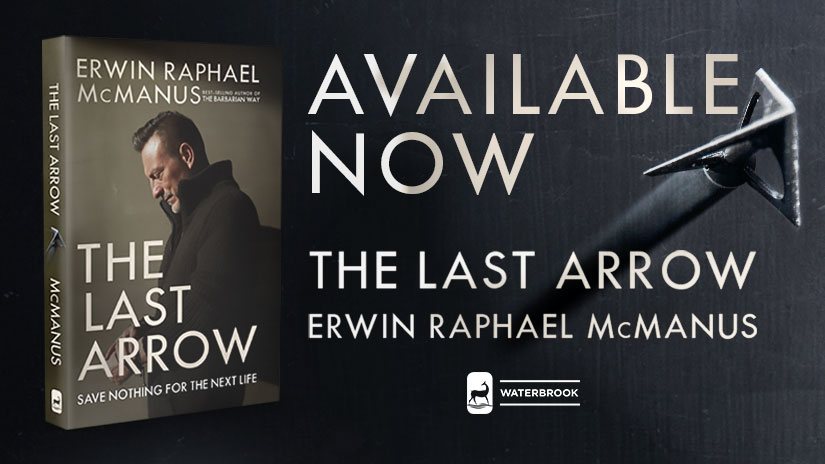 Excerpt from The Last Arrow
By Erwin Raphael McManus

The last family I met while we were in the Bekáa Valley was headed by a fifty-five-year-old Syrian woman who looked as if she were in her eighties. Her husband had been killed before they left Damascus, and the father of her grandchildren had gone to Germany more than two years before and they had not heard from him since. All the other relatives had been taken hostage, imprisoned, or executed. She was alone in the middle of this interim settlement with three grandchildren all under the age of ten. She told her story through her tears, and on occasion her words were unintelligible as weeping overwhelmed her and her sorrow seemed to consume all the oxygen from her lungs.

We left when we heard the call to prayer. She was a devout Muslim, specifically a Sunni Muslim, and we wanted to respect her desire to pray and ask God for help. We left quietly, and though the children were a beautiful delight, I was overwhelmed with sorrow myself. The reality of their condition was sobering, to say the least. They had no hope, no way out, no future that any human being would ever want for themselves or anyone they loved, and we were walking away, returning to our amazing lives, returning to all of our creature comforts, to all of the provisions that we would thank God for.

As we walked, I quietly asked the representative from the humanitarian agency we were working with if I could help this family in just a small way. I knew it was against policy and procedures. I knew that it would be inappropriate to give them money directly and that we needed to respect the process, but I just couldn’t shake the fact that in my pocket was more money than the family would see in three months. I was holding within feet of them enough money to buy them food and supplies that would otherwise never come their way. The worker’s response was as I expected. He graciously thanked me for my good intention but reminded me that it would violate the process they had implemented for long-term engagement of the refugees.

I might have asked two or three more times—I don’t remember. I told him I knew that making the gift wasn’t going to solve the problem and that maybe my desire to do this was more about what I needed to give than what they needed to receive. I actually reconciled myself to the belief that I was not going to be able to give them money, until another of the workers came to me and said, “Let’s go take a walk.” He must have seen the despair in my eyes and sensed that I was close to having a meltdown. So we walked back to the temporary shelter that this family of four lived in. The grandmother was already in her time of prayer. I didn’t know what would be appropriate, or maybe I knew but I didn’t care. I had the children interrupt her and ask her if I could speak to her for just a moment. She had changed clothes from the clothes she wore when we’d inter- viewed her. She was wearing all white out of reverence to God.

Through the translator, I expressed these simple words to her: “Sometimes you pray and sometimes you’re the answer to prayer.” Then I handed her the small amount of money I had. I asked that God would bless her, and I left, never to see them again.

I am more than aware that I did not solve the Syrian refugee crisis. I didn’t even solve it for this one family. But it doesn’t change the truth of that moment. Sometimes we pray; sometimes we are the answers to prayer. You become the answer to prayer when you act as though your life depends on it. Because it does. And so do the lives of everyone your life touches.

Read more articles like this and hear from other voices of inspiration by joining iDisciple today.

No images found!
Try some other hashtag or username